Review – Scotch on the Rocks by Lizzie Lamb 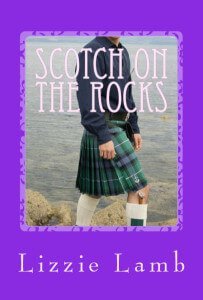 I was delighted recently when Lizzie Lamb gave me a copy of Scotch on the Rocks.  I’ve only heard great things about her books so I thought I’d find out about them for myself.  And Lizzie joins me on Thursday for a question and answer session too so do pop back.

SCOTCH ON THE ROCKS – Where men are men and the women are glad of it!

ISHABEL STUART is at the crossroads of her life. Her wealthy industrialist father has died unexpectedly, leaving her a half-share in a ruined whisky distillery and the task of scattering his ashes on a Munro.

After discovering her fiancé playing away from home, she cancels their lavish wedding arranged for Christmas at St Giles Cathedral, Edinburgh and heads for the only place she feels safe – Eilean na Sgairbh, a windswept island on Scotland’s west coast. Where the cormorants outnumber the inhabitants, ten to one. When she arrives at her family home – a bed and breakfast managed by her firebrand Aunt Esme, she finds a guest in situ – BRODIE.

Issy longs for peace and the chance to lick her wounds, but gorgeous Brodie, turns all that on its head – and her world along with it. In spite of her vow to steer clear of men, she grows to rely on Brodie.

However, she suspects him of having an ulterior motive for staying at her aunt’s B&B on remote Cormorant Island. Having been let down by the men in her life, will it be third time lucky for Issy? Is she wise to trust a man she knows nothing about – a man who presents her with more questions than answers? As for Aunt Esme, she has secrets of her own . . .

What did I think ?

Loved it! Truly loved it!

This was my first Lizzie Lamb book and once I’d practiced the name of the place a few times (and I’m sure it still wasn’t right) I settled right into this book and felt like an additional character on the sidelines.  I felt like I’d curled up on the sofa, with a big comforting blanket wrapped around me.

There were lots of funny moments in the book, and lots of emotional ones too.  Issy driving around with her father in the car made me smile a lot, because I did the same myself although my dad was in the front seat of my mini!

I think I also fell a little bit in love with Brodie.   Well maybe a tad more than a little bit!  He was hot!

It was an easy read, where the pages never stopped turning.  A delightful romance, with a little mystery, a lot of laughs and with a perfect ending.

After teaching her 1000th pupil and working as a deputy head teacher in a large primary school, Lizzie decided it was time to leave the chalk face and pursue her first love: writing. She joined the Romantic Novelists’ Association’s New Writers’ Scheme, honed her craft and wrote Tall, Dark and Kilted (2012), quickly followed a year later by Boot Camp Bride. Lizzie loves the quick fire interchanges between the hero and heroine in the old black and white Hollywood movies, and hopes this love of dialogue comes across in her writing. Although much of her time is taken up publicising Tall, Dark and Kilted and Boot Camp Bride, she has published a third novel SCOTCH ON THE ROCKS and started research for number four. Lizzie is a founding member of indie publishing group – New Romantics Press. In November 2014 they held an Author Event at Waterstones High Street, Kensington, London the icing on the cake as far as they are concerned – and a fitting way to celebrate their achievements. As for the years Lizzie spent as a teacher, they haven’t quite gone to waste as she is building up a reputation as a go-to speaker on the subject of self-publishing.