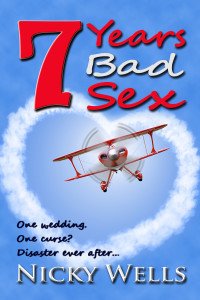 7 Years Bad Sex by Nicky Wells is out on 14th May 2015 and today I’m delighted to take part in Nicky’s cover reveal.   I’m really looking forward to reading this!

One wedding.  One curse?  Disaster ever after…

A seven-years-bad-sex curse? Surely not! Yet something went wrong when rock singer Casey and drummer Alex got married on that beautiful yacht anchored off St Tropez in the south of France. Something went badly wrong. For even on their wedding night, the young couple discovers a complete and somewhat surprising inability to make love. Muddling through their honeymoon with a string of thin excuses for their predicament, the lovers defer finding a solution (and panicking) until the return to their home in London. After all, they married for life and to make rock music, not for the love of sex. Right?

But when they resume life as normal in London, all hell breaks loose. Increasingly frantic in their quest for release, the unhappy newlyweds embark on a string of hilarious and occasionally harmful antics that drives them, their band, and an assortment of random strangers to the brink of despair. But it ain’t over ‘til it’s over or, in this case… it ain’t over ‘til the newlyweds sing.

Here’s an excerpt from the book so you know what you are looking forward to:

There was a stunned silence in the room while Alex and Casey tried to assimilate the importance of this statement. She remembered all too well her conversation with Alex on the yacht after they had trawled through the wedding video. He had pointed out to her even then that she hadn’t looked at him.

Casey shivered. She caught Alex’s eye and saw nothing but utter confusion. Liza was still standing up, one fist raised in an air punch. Sasha had taken one of Casey’s hands into her own.

Eventually Alex spoke.  ‘Maybe we didn’t look at each other. So what?’

Liza and Sasha shared another look. ‘The seven-years-bad-sex curse!’ they shouted as one.

Myles was chuckling so hard, he toppled over sideways on the sofa and had to hold his stomach. ‘That’s why we had to rush over here? To tell them about a seven-years-bad-sex curse?’

‘Laugh all you want,’ Liza said calmly. ‘But you’re watching it in action.’

Casey swallowed hard. She didn’t believe in curses. They were nothing but delusory superstitions from the middle ages. But still, both Sasha and Liza looked utterly serious.

‘So—so what does that curse entail?’ Casey asked, her voice almost a whisper.

Sasha produced her smartphone and called up a website. ‘It says here,’ she said, ‘there’s a superstition in many parts of southern Europe about how not looking at each other when clinking glasses during a toast brings couples seven years bad sex.’ She angled her phone so that everyone could see the screen.

‘And you were in France when you committed this ritualistic mishap,’ Liza offered helpfully. ‘So that definitely applies.’ 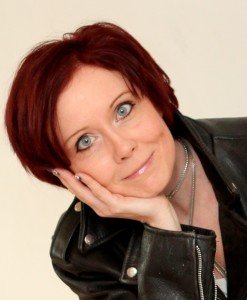 Nicky’s books offer glitzy, glamorous romance with rock stars—imagine Bridget Jones ROCKS Notting Hill! If you’ve ever had a crush on any kind of celebrity, you’ll connect with Nicky’s heroes and their leading ladies.

Born in Germany, Nicky moved to the United Kingdom in 1993 and currently lives in Lincoln with her husband and their two boys. Nicky loves listening to rock music, dancing, and eating lobsters. When she’s not writing, she’s a wife, mother, occasional knitter, and ad-hoc radio show presenter. Rock on!

Did you know? There’s a single out now by Nicky’s fictional rock band Tuscq come to life! “Love Me Better” is available for download from Amazon, iTunes and many other places.