Blog tour review – Him With The Beard by Pernille Meldgaard Pedersen 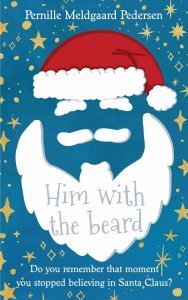 Well I suppose it is 1st December so it’s officially Christmas month.  I don’t like to get organised for Christmas till then as a rule but this year I’ve read a few Christmas books quite early for me.  And Ollie is 11 years old and I’m quite grateful that he’s still not sure about whether Santa is real or not right now (I think we’ve done pretty well getting this far to be honest!).

So when Rachel asked if Ollie and I would be interested in reading this, of course, we said ‘ho, ho, ho, go on then!’ Sorry extremely bad taste I know!

So here’s a bit about the book and my thoughts, then there’s a great giveaway which you might like to take part in further down the post.  Good luck!

Do you remember that moment you stopped believing in Santa Claus?

When nine-year-old Mille suddenly no longer believes in Santa Claus, it turns the house upside down.

Her mother, Stella, is in a pickle as the hunt to find Santa Claus unearths some family secrets.

Christmas is at risk!

And there’s only one person who can save it.

So what did I think?

I remember when I was about 25 I went to see Miracle on 34th Street with my darling Mum and we both came away knowing that Santa was real, so when Ollie asks me now whether he’s real or not, because some kids at school say he isn’t then, I say to him “that I believe in the Magic of Santa Claus.”  That’s pacified him up till now.

So The Man With The Beard is about a nine-year old who doesn’t believe that he is real anymore but more than the fact that she doesn’t think Santa is real, she’s shattered the illusions of her mum Stella, who has always believed that he is!  Not only did she find out some revelations about Santa, but she found out some pretty important stuff about her life too.

I did find it quite hard to say much about this novella without giving away the plot which I don’t want to do.  This is a fun, entertaining, short read, written really well, all about the magic of Santa and the magic of Christmas.  But more than the magic of Christmas, it’s about love and that love is the thing that makes the world go round and when you have love in your life, nothing else really matters.

I’m sure that if this author writes more, I’d be well up for reading it. 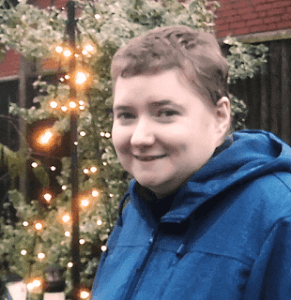 Pernille was born in 1988 and loves that she was born in the decade with the tallest hair, the most colourful clothes, and the best music.

Her imagination never stands still, and it’s often expressed in words and pictures.

She wrote her first story when she was six years old. It was about the cat she unfortunately never got but wished for more than anything.

She loves autumn and Christmas and believes in elves.

From day to day she is a knight in training, an animator, and a secret agent – she has saved the world a few times by now.

She thinks the recipe for a good book is the same as the one for having a good life – a sense of kinship, humour, love, and that one thing that gives you a daily smile.

Vestercity is a fictional city based on her upbringing near the city of Herning in Denmark.

Win A Cosy Christmas Pack – with One Jim Shore Santa Claus Ornament, Santa Claus Marshmallows, A Chocolate Advent Calendar, A Pretty Christmas Storage Box and finally, A Signed Copy of my book Him With The Beard. 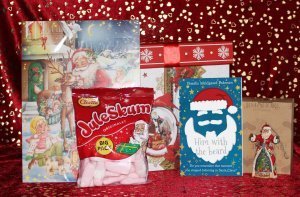